Welcome to the Tri-space Laboratory. Here, you can read about a multi-metric theory of space, time and matter, which was originally developed in 1997. This was motivated by my personal dissatisfaction with the level of understanding in theoretical physics, particularly nuclear and elementary particle physics, but also with the absence of foundations for quantum mechanics. The new theory appears to represent a mathematically simple, consistent and logically completable account of all of the laws of physics.

Although it appears to complement Newtonian physics, special relativity is flawed by the requirement that physical length and historical time arise from the same metric, thus relating length and time intervals by √-1 (see The twin paradox). Quantum mechanics is based on a set of outrageously ad hoc rules and assumptions – yet it seems to make consistent but incomplete sense. Neither theory can encapsulate causality in time or the principles of classical thermodynamics; both are completely time reversible.

The multi-metric approach of 'Tri-space' (see figure) is wholly consistent with the established laws of physics. The concept of an unsigned space-time metric is replaced by several signed metric spaces, defining 'energy' and making the physical dimensions specific to their functions (see Schrödinger’s cat resolved).

This has enabled me to construct a theory of bonding for the liquid state, which can also be applied to glass and to the pairing of electrons in anisotropic crystalline lattices, describing a robust form of superconductivity. None of this is possible on a single, space-time manifold. The scope of my suggestion for quantum theory and condensed matter theory is summarised in Why Tri-space?

By connecting spaces with different metrics, using a 'wave function', various kinds of elementary particles can be described, with purely geometrical quantum numbers. By adding universal force laws, acting between the particles according to their masses or quantum numbers, all of the laws of physics can be generated. Quantisation occurs when manifolds inter-connect and history is made whenever the topology of connection changes. In between times, the amplitudes of inter-connection can evolve and propagate, as described by quantum mechanics.

Under How time works is a visualisation of the Tri-space description of how time works, in the case where a system of interacting particles is evolving. The process is inherently statistical and time-irreversible – like a perpetual game of dice.

My suggestion is that the classical metric itself is in fact composite – and I don’t mean just rolled-up-small, extra dimensions. I mean a set of inter-connecting, signed, metric spaces, each of which provides a sub-set of nature's laws (see the figure). 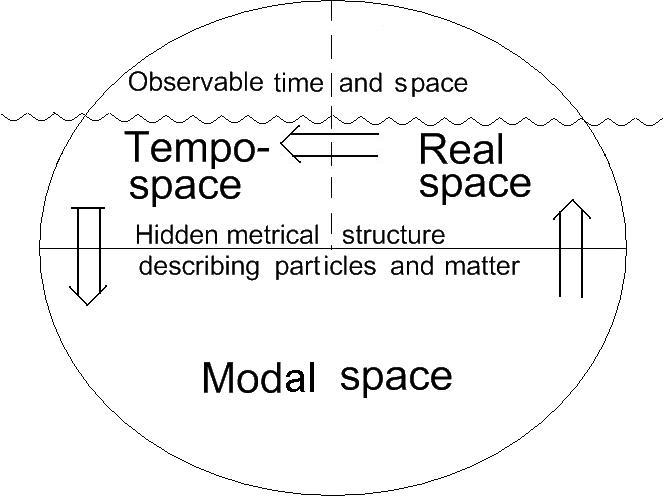 The Generic Equation of Connection, in the rest frame using ψ(t;rs) and the Planck constant ħ, with i2=-1 :-

The left side describes the constant driving energy E0 M is the fixed mass; Mc2 is the corresponding energy. The spatial energy is from Schrödinger’s equation and V(rs) describes the local potential energy: these must add up to a uniform value (but the 'effective mass' μ may not be uniform - as determined by the spatial metric).

The GEC is 'scalable', for composite particles, because E0 can replace (part of) Mc2 at the next level of structure, which projects into a separate Real Space. A form of classical metric re-emerges as the resultant space and time, when the structure of matter has been resolved. But here history is inexplicably determined by matter and with instantaneous ('spooky') action at a distance when wave functions resolve.

We can infer the properties of the underlying metrics from studying matter and the particles of nature, at all levels of structure and in all of its observable forms. I believe that one particular, multi-metric structure generates all of the forces and particles in nature, and that this should be understood by future students of physics.

Just one proviso – you must never use this theory to design or develop weapons of any kind. Further, the author accepts no responsibility for the correctness of the theory or any consequences of its application.

Your comments on this theory and my presentation are very welcome, see Responses.